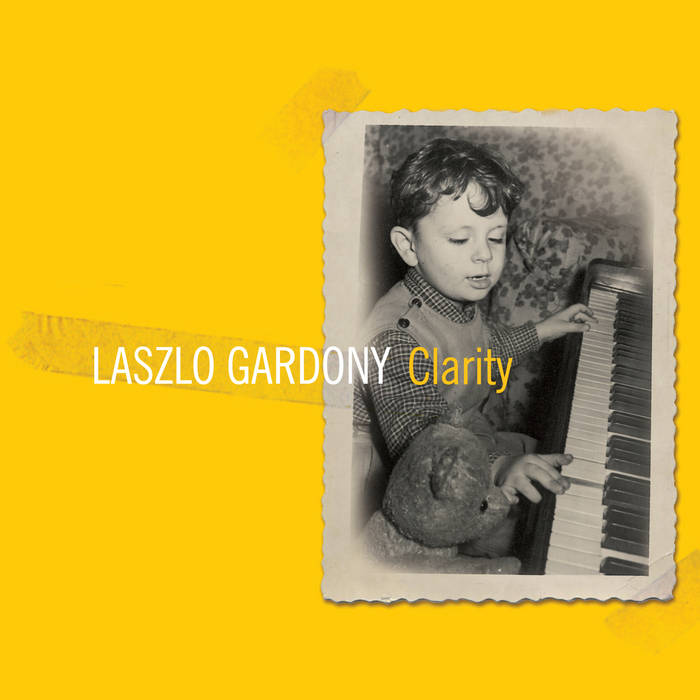 Great improvisers combine probing intellect with keen emotional sensitivity. Boston pianist Laszlo Gardony displays the head and heart of a jazz master on his breathtaking new solo recital Clarity, a soul-bearing album full of rhythmic variety, melodic discovery and an abundance of grace. Slated for release on May 7, 2013 by Sunnyside, the CD arrives two decades after Gardony’s acclaimed Sunnyside debut Changing Standards, the album that established him as one of jazz’s foremost practitioners of the solo piano format.

More than a gifted improviser, Gardony is a cagey musical architect who understands that “shape is paramount. Without shape, regardless of what you create in your solo piano playing, it’s not going to connect. On Clarity I created these 10 short stories building on each other and I naturally pause between them. The idea is to transcend the sense that here is a pianist and here is a listener. It’s more of a joint journey.”

A longtime professor at Berklee College of Music, Gardony has spent much of his career in the company of jazz’s most formidable artists, including his long running band with John Lockwood and Yoron Israel, and entrancing trio sessions with Dave Holland, Bob Moses, and Miroslav Vitous. Always open to exploring new musical territory, he’s also performed and recorded widely with the Wayfaring Strangers, violinist Matt Glaser’s ingenious old-time jazz project. But Gardony is at his most unfettered alone at the piano, where he often records long sessions of spontaneous composition for his own edification.

On a brisk fall morning in 2012, feeling inspired and brimming with inchoate emotions over the recent passing of his parents, he started a digital recorder, sat at the bench and promptly lost himself in an extended session of searching improvisation. Afterwards, suspecting that he had reached some new place, he set the music aside to give himself some perspective. When he listened to the session several months later he found that he had indeed captured a powerfully coherent, deeply personal and startlingly beautiful cathartic journey. He retrospectively titled the 10 pieces to offer signposts to listeners, as in a guided meditation, but the music’s wondrously balanced ebb and flow speaks for itself, singing a song of bountiful life.

“I always find a title that feels poetic or playfully alludes to the mood or meaning of the tune.” Gardony says. “In this case I felt it would be more appropriate to describe what was happening in my system, going through these stages after losing my parents. None of this came to me when I was playing. It was a very joyful, expansive but introspective session. I sat down, felt really inspired, and one tune led to another.”

The album flows with an internal emotional logic, opening with the stately, gently insistent “Settling of a Racing Mind.” “Working Through” sounds like a lost treasure from the Lennon/McCartney songbook, circa Abbey Road, while the ethereally winsome “Opened Window (Hopeful Horizon)” feels laden with promise. “Resilient Joy,” an expansive, ebullient dance in a green field, displays Gardony’s gift for sturdy, folk-like melodies. Clarity closes with “Resolution (Perfect Place),” beatific melody suffused with a well-earned sense of peace.

Born in Hungary, Gardony showed an early aptitude on the piano (the cover photo captures him at three years old, already looking intent and rhapsodic). He wasn’t much older when he started improvising, devising little tunes inspired by the blues, pop and classical music he heard around the house. Immersed in the European classical tradition while growing up, he was drawn to progressive rock as a teenager, and spent countless hours improvising blues-based music at the piano. He investigated gospel and studied jazz, a passion that soon overshadowed his classical pursuits. “We had jazz and African music classes at the Conservatory,” Gardony recalls. “There were some very knowledgeable people and a lot of records. When it came to jazz it was a tiny community, but very inspiring.”

After graduating from the Bela Bartok Conservatory and the Science University of Budapest, he became one of Europe’s most sought after accompanists, and released his first albums as a leader. Possessing a powerful sense of swing, a strong feel for the blues and a firm command of post-bop vocabulary, he gained invaluable insight by sharing festival stages with acts like Art Blakey’s Jazz Messenger and Abdullah Ibrahim. After several years on the road, Gardony decided he needed to deepen his knowledge of jazz.

A full scholarship to Berklee brought him to America in 1983, and a faculty position at the school upon graduation kept him stateside. He made his US recording debut with the acclaimed 1988 album The Secret (Antilles) featuring Czech bass great Miroslav Vitous and drummer Ian Froman, but it was his 1st place win the following year at the Great American Jazz Piano Competition that catapulted him into the national spotlight.

He seized the moment with 1989’s brilliant release The Legend of Tsumi (Antilles), a trio session with bassist Dave Holland and drummer Bob Moses focusing on Gardony’s finely wrought original compositions. The album earned rave reviews. Scott Yanow wrote, “the most impressive aspect of this performance is how the pianist totally integrates his playing with that of his sidemen…so they speak in one unified voice.”

He’s collaborated with saxophone greats like David “Fathead” Newman and Dave Liebman, but his subtle and rhythmically intricate pianism has meshed particularly well with jazz’s most inventive guitarists. Over the years he’s performed with Mick Goodrick, John Abercrombie, John Scofield, Mike Stern and Garrison Fewell. “Being with Dave and Miroslav was such an education,” Gardony says. “If you really immerse yourself in those moments, it can change you, whether it’s one concert or a week-long gig. If you’re really present, amazing transferences and exchanges can happen.”

His primary vehicle for the past decade has been his state of the art trio with bassist John Lockwood and drummer Yoron Israel, an ensemble first documented on the 2003 Sunnyside release Ever Before Ever After. One of the finest working bands in jazz, the group performs and records regularly, exploring Gardony’s extensive book of original pieces as well as the occasional standard and jazz classics by the likes of Horace Silver and Billy Strayhorn. Gardony augments the trio’s latest release, 2011’s beautifully textured tribute to jazz’s African roots Signature Time (Sunnyside), with Stan Strickland on saxophone.

“It’s heaven playing with such great musicians,” Gardony says. “John and Yoron hear the music around them so well. If I give them charts they immediately understand what I’m trying to do. People think it’s a great career move to do projects. You do something and then you move on. But all of my heroes in rock or jazz, Coltrane or Pink Floyd, created in the context of a great band.”

No band has stretched Gardony more than The Wayfaring Strangers. A long-time fan of Gardony’s who credits the pianist’s first solo album Changing Standards with opening his ears to modern jazz, violinist Matt Glaser initially recruited him to perform on one track of 2001’s Shifting Sands of Time (Rounder), contributing a haunting solo to Ralph Stanley’s elemental rendition of “Man of Constant Sorrow.” By the release the project’s second album, 2003’s This Train (Rounder), Gardony was an essential member of the ensemble. The group continues to perform, exploring its singular synthesis of bluegrass, Appalachian roots music, and jazz. Like every other profound musical experience under his belt, some of the Wayfaring Strangers has shaped Gardony’s expression in straight ahead contexts.

“Playing with Matt and people like Tony Trischka you learn so much about American folk and Appalachian music,” Gardony says. “I’ve developed such reverence and love for it. There’s an immediacy, intimacy and intensity when you hear folk musicians playing for each other. It’s definitely influenced my music making.”

There’s no mistaking the music on Clarity for anything but 21st century jazz, but the frank immediacy of Gardony’s solo playing brings to mind that Thelonious Monk once told Bob Dylan, “we all play folk music.”

Bandcamp Daily  your guide to the world of Bandcamp